Not to get too morbid with the predictions but it does seem like we will pass 20,000 deaths at some point today, which is double what it was a week ago and quadruple the 5,000 total from two weeks ago.

Still, if we think about the numbers in the context that about 500,000 people a year die every year from the flu, it doesn’t seem like so much at all. Of course, with the exponential rate of growth described above, it’s easy to see why people are afraid of these numbers getting much higher.

Truth is, I hope we never figure out if all the steps we’re taking now are worthwhile or not. If some dweeb on the internet comes at me in 3 months yelling about how we stopped the entire global economy for something that is no worse than the flue, then I suppose that will be a great level of success.

Earlier today the German government joined the call with a proposed package of €750 billion to support their economy.

The German DAX index seems barely phased by the bill though and ended up closing in red for the day. The German market remains about 30% off the all time high experienced last month. 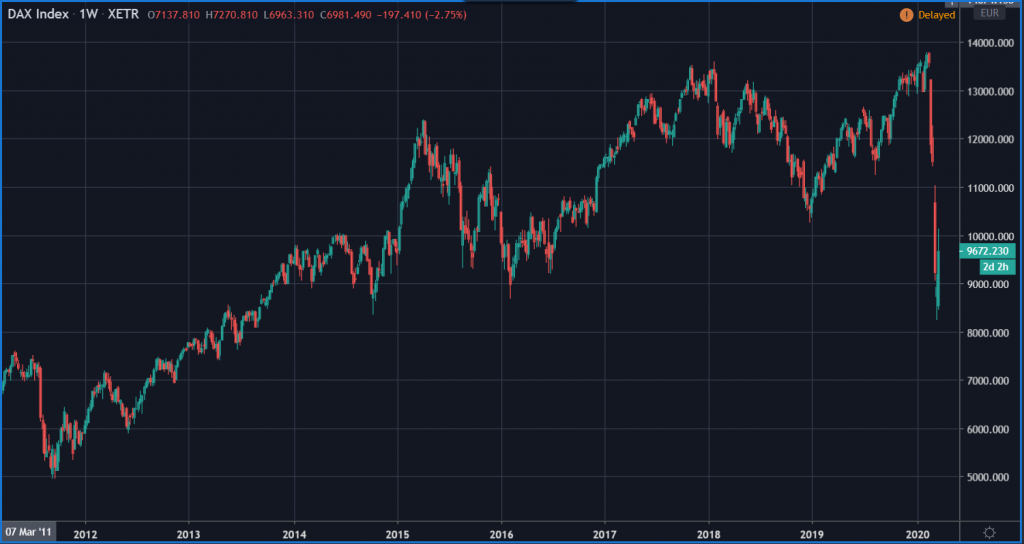 Meanwhile in the United States, a draft bill has been agreed upon by both Democrats and Republicans. The bill includes a total of $2 trillion in aid for the US economy. However, as far as I understand, the details are not yet public, so we don’t really know the details just yet. As well, it will still need to be officially ratified by both houses of Congress and be signed by the President.

The ratification process is not very clear at this point either given that Congress is used to voting in person and that’s simply not allowed these days. They say it can happen by the end of the day but I guess we’ll see about that. In the meantime, the stock market seems to be waiting patiently at the moment.

Judging by the VIX volatility indicator, it does seem like the initial shock might just be behind us by now. Here we can see that after seeing record high levels a week ago, it’s finally receding. 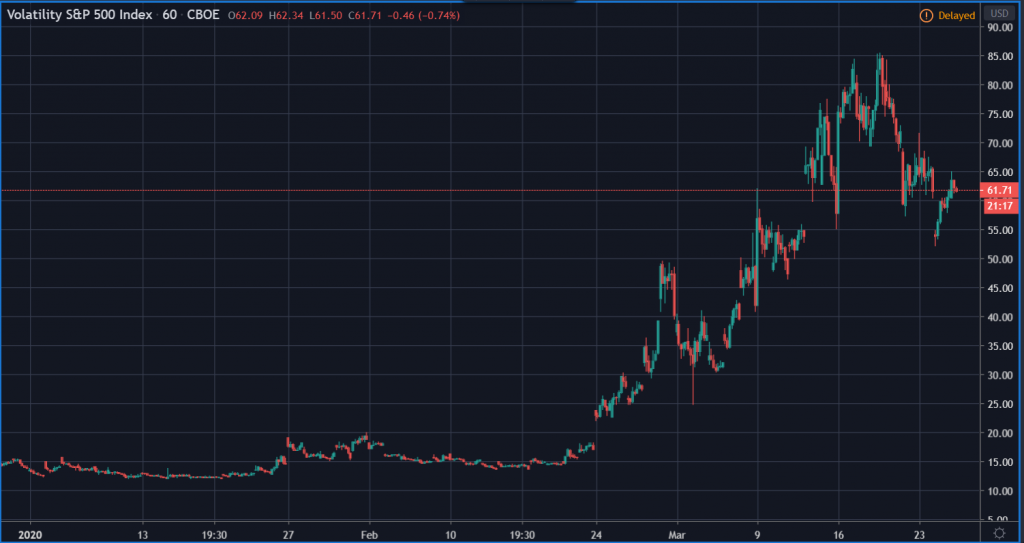 Now, that’s not to say that this is definitively over. In fact, the April earnings season is gonna be biblical. But from here on out, we’re more likely to gain more knowledge and information regarding the virus and the economic impact of efforts to slow it down. So at least the peak uncertainty should be behind us.

Now, my friends, I find myself in a bit of a dilemma. My wire transfer to eToro finally went through and the funds are sitting in the available balance but after taking a loss of about 50% and now doubling the entire deposit, I figure that a bit more finesse might be prudent than a flat market buy will all available funds.

Especially now that the extreme lows have past and the price no longer feels like a bargain.

My instinct to close the altcoin positions and push everything into BTC on March 11th seems pretty prudent in retrospect. Here are some of the top alts I was holding before the plunge. Bitcoin in orange clearly lost less than all, except for Dash (green) but I guess you can’t really call them all to a T. Certainly, had I known about the plunge in advance I would have just closed everything but that’s an impossible level of foresight really. 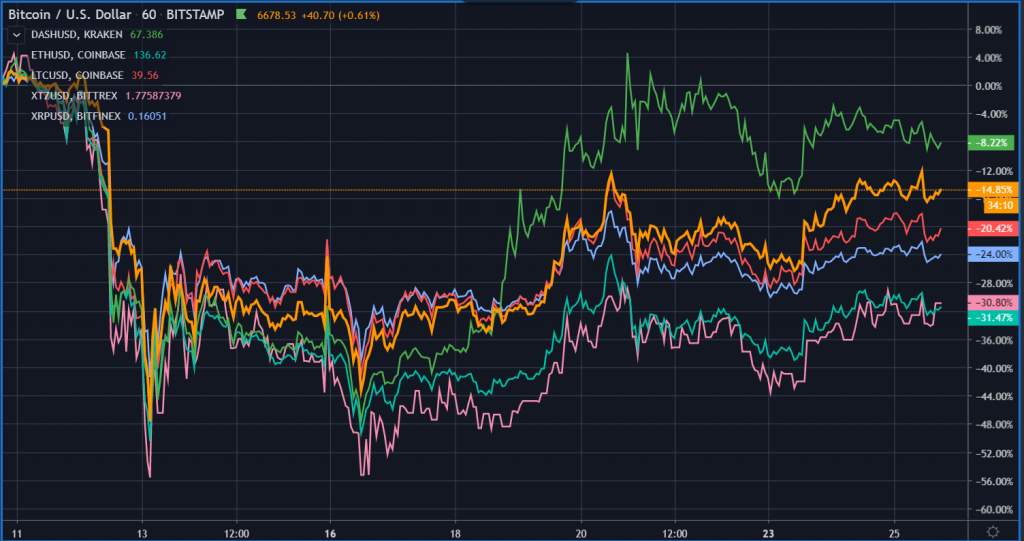 In any case, this is supposed to be a long term account. So, after much deliberation, I’ve decided to whip out an old tried and true strategy for this one using a mix of buy the dips and dollar cost averaging.

With $1,000 in the balance, I’d like to invest the entire about over the next month. That leaves $250 per week for the next two weeks, which will be deployed in two or three purchases, depending on the price. The point of course, will be to target the lowest prices I can get during the course of the week.

Let’s hope it works out well but I have a feeling it’ll probably be better than just accepting an arbitrary market number today. I guess time will tell. If you’re in the United States and would like to copy my entries please use this referral link to copy my trades.

The post Bitcoin Price Remains Firm But No Longer Seems Like a Massive Bargain appeared first on Bitcoin Market Journal.

A cloud company announces the listing of its coin on Bittrex